While Dima and Ilan, together with Itzi and the rest of the OMA International brigade set up all their equipment in the studio after breakfast on Saturday, I took some ‘time off’ to relax in the garden. Later on, when Supraplus was playing, I joined the company – and by then the studio had been transformed into a real jungle of cables, tripods, projectors and other electronic equipment!

(Max from Supraplus – photo by Maki)
The Tagtoolers were all happily involved in deep technical discussions, plugging and unplugging cables and adjusting projectors. The talk was all about Modul8 and VVVV – completely above my head! I decided not to take any photos for the blog but instead just sat back, relaxed and surveyed the scene. Then Maki gave a presentation on behalf of OMA about current Tagtool developments. This was all very interesting and exciting – but again, most of it was too technical for me to be able to write about. 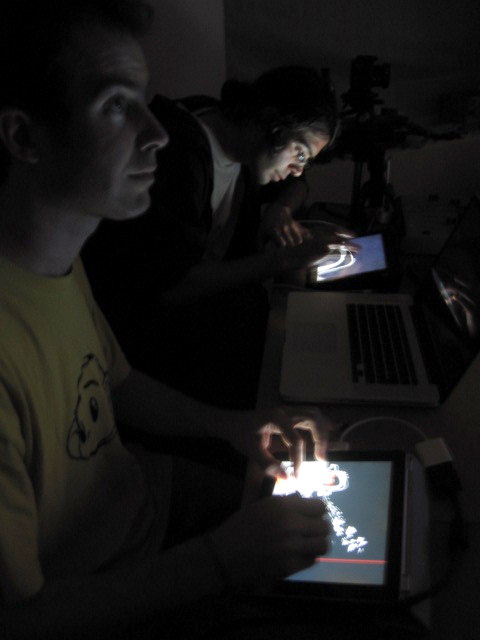 In this photo Maki and Seppi are drawing using their iPads.
The big Saturday night jam session in the studio, using the set up with three Tagtools and projectors that can be seen in the photos below, began after dinner. 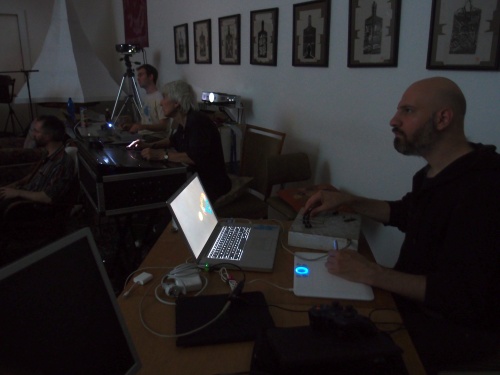 There were several sessions of drawing and animation by Ilan, Maki, Itzi, Seppi and me – working at the Tagtoools in different combinations (with Ilan, another left-hander, able to use my big all-in-one when I wasn’t drawing – which was very convenient!) 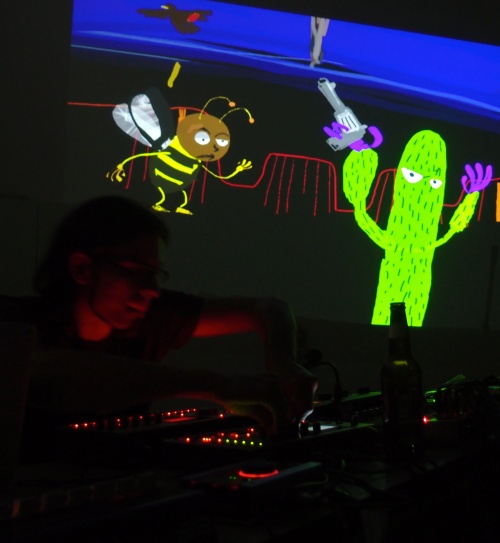 (Above, Eric with one of Maki’s iPad drawings – photo by Maki.)
All of these sessions were great fun and went on till very late, with Eric taking over from the band to provide the music to accompany our drawing. Although Dima and Seppi had their video cameras set up to capture the sessions this didn’t go quite according to plan – Dima’s camera overheated and switched itself off and Seppi’s card was soon full…..However, Dima says, ‘There will be some video’ – so maybe I will have it for my next posting! Meantime, here are some of my photos from what was a most enjoyable night of drawing. 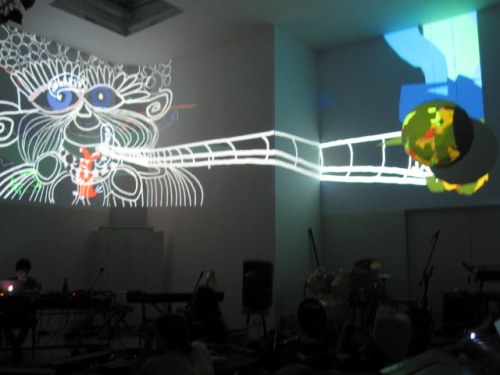 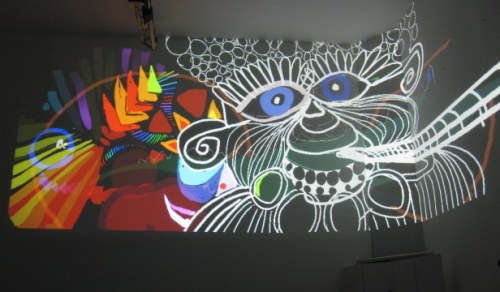 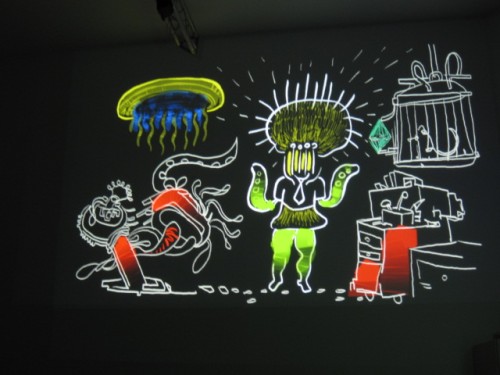 It had been a most enjoyable and interesting weekend of collaborative drawing – hard work but also a lot of fun!

NOTE: This event was made possible with financial support from the cultural promotion, “Wir sind Nachbarn” (we are neighbours) by “NÖ Landesakademie” (an institute of Lower Austria).

On Friday the rest of the guests arrived and in the evening the Tagtool Performers Weekend programme began. As the weather was good we decided to have our first projection session outside in the orchard.

But before any drawing could begin there was the very important business of feeding the company to attend to!
Itzi spent the afternoon in the kitchen preparing his special recipe for Austrian dumplings while out in the garden Seppi was in charge of the goulash.
He used the big Hungarian cooking pot I bought in Szeged when we performed there last year – it’s the first time we have had a big enough company to use it!

As Holger had spent the day heroically cutting the (waist high!) grass in the orchard ready for the evening performances it seemed only right that he got the first tasting of Seppi’s delicious goulash – with Zuzi as usual hoping to be next in line!
Before darkness fell we got busy erecting the gazebo to shelter the Tagtool performers’ work area and putting in position the four polycarbonate sheets for the projections (They are lightweight and easy to assemble into a really impressive outdoor ‘canvas’ – though we got them originally to use as roof light diffusing panels in the studio!)

After the meal (accompanied by calvados and beer of course!) everyone was in party mood and ready for our first night of Tagtooling. 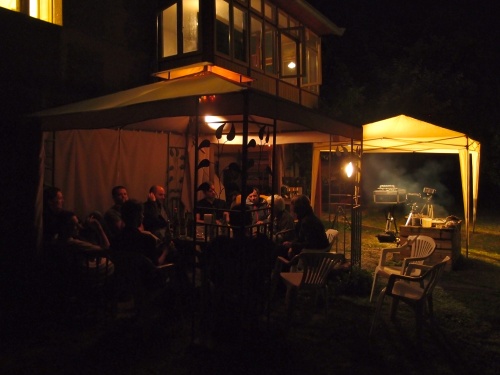 Dima’s dual Tagtooling set up enabled us to draw in pairs and cover the entire 7m length of the polycarbonate sheets as well as extending into the trees above. Here are a selection of images from this fun drawing session (some mine and some from Maki) – which needless to say went on till very late!

Below is a little collage of photos showing Holger, Seppi and Itzi providing a very lively impromptu accompaniment for our drawing. 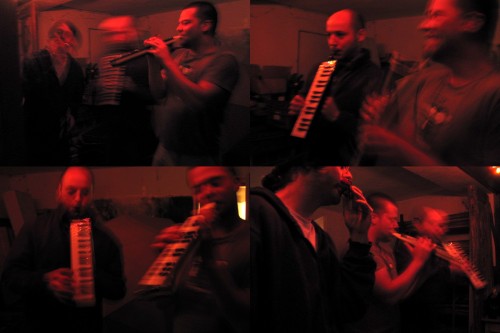 This was a great start to the Tagtool Performers Weekend!

My next posting will have images from the rest of this weekend – and also some video (if Dima gets round to editing it!)

The first guests arrived mid-week – fully equipped with Tagtools, projectors, laptops, musical instruments and all the other ‘essential’ electronic equipment necessary for a weekend of serious fun!

But in the photo above – the early arrivals are relaxing with the dogs in the garden before unpacking their equipment in the studio.

And of course in the evening we had a big barbecue – with Itzi in charge of the grill while Holger was working his culinary magic in the kitchen – a great beginning to this event!

On Thursday evening Itzi packed his projector and Tagtool in the van and we went to Prague to participate in the programme of open air projections organised by the artists at Trafačka studios.

Below are some images from this ‘open mic’ evening that was held in the inner courtyard of the Trafačka gallery and studio complex. 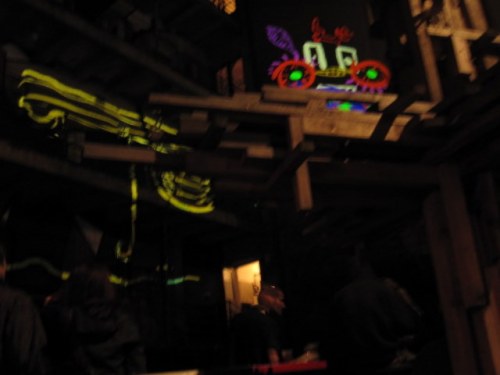 This space doesn’t have a lot of ambient light so it is ideal for Tagtooling – but unfortunately this also meant that most of the photos I took with my little camera were either far too dark or out of focus!

There was also music, the bar and grill – the perfect recipe for a most enjoyable evening and it was quite late by the time that everyone had had a chance to draw. Then Itzi packed up all the equipment and we drove back to Libušín.

In a few days I will do another posting with photos from the Big Tagtool Weekend – there were lots of opportunities for some serious Tagtool discussions, intensive collaborative drawing as well as some fun jam sessions….