I was invited to draw to accompany Awali (the project of Prague based musician, Tamara Shmidt) at the opening performance on Friday 4 October on the Club Stage at this annual international festival of advanced electronic music and new media art organised by the Lunchmeat Label at Studio Hrdinů in Prague.

Dima was on hand to take lots of photos for me, including this ghostly shot, which I rather like, of some of the audience standing close up to watch Awali’s performance.

Unfortunately in all of the photos, because there was no lighting on the stage itself, if she can be seen at all, Tamara only appears as a silhouette, which sometimes I tried as in the photos below to incorporate into my drawing. 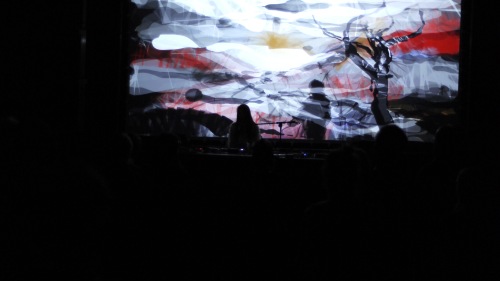 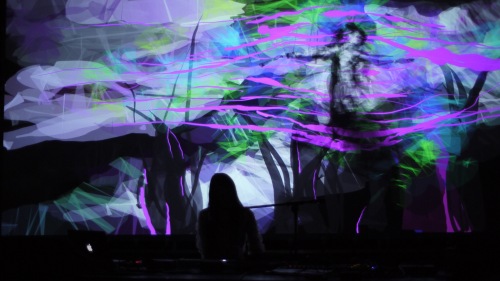 I had been able to familiarise myself beforehand with most of the music that she was going to perform, but because both Tamara and I had had terrible colds, we were only able to have one rehearsal together on the day before our performance – which made me very nervous indeed!

I had decided to use a lot of transparent colour and semi-abstract images to accompany several of the songs – which was quite a departure from my usual imagery, but seemed to me to fit best with the mood of Awali’s music. Although we had so little time beforehand to work together I really enjoyed making these visuals and after the performance we decided that if an opportunity arose we would be very happy to work together again. I will end this post with another two of Dima’s photos. 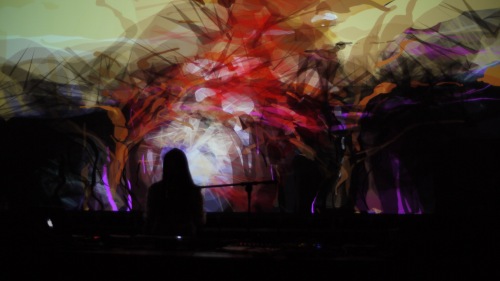