On the last night of the festival K.U.N.T.Z. presented a different programme entitled ‘The Golden Kuntry’, with guest violinist Michael Makarov. 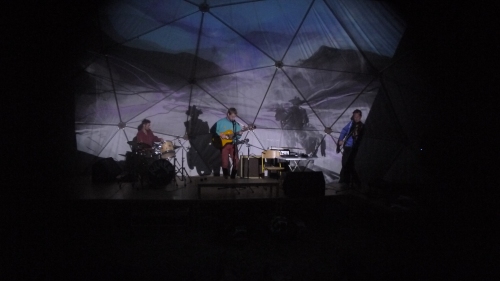 To set the scene I drew a landscape with cowboys in silhouette behind the musicians, and then developed a succession of images on Western themes in parallel with the music rather than making a separate drawing for each song.

I made this selection of images from photos taken by Dima and Stefanie – when I am doing this kind of continuous sequential Tagtool drawing performance there is no time for me to stop for a minute to take any photos myself! To end this post here’s a shot of Jan at the drums with my drawing of a cowboy behind him…..

Although K.U.N.T.Z. have presented the song cycle ‘Hexentiere’ in different venues in Vienna, Berlin and Prague, the beautiful dome tent, pictured below, of the ‘Drama’ stage at Festival HISTeRIA provided an ideal space for us to show in performance the multi-dimensional aspect of the piece for the first time.

With Jan on drums and David delivering vocals, mimicking both the sounds and movements of the seven animals, I developed a Tagtool drawing for each one, morphing each scene into the next while the masked dancers performed in front of the stage. Their movements sometimes were captured as shadows within the drawing which produced a most interesting fusion of the ‘real’ and old-school Tagtool drawn imagery. Although I had made the donkey and wolf masks and the crow on the stand initially as props for promotional material for the band, being able to include these in the show was a real bonus – so, very many thanks must go to the dancers from the festival who performed with us! The photos below, which were taken my friend Stefanie, show well this multi-dimensional aspect of the piece. Music, dance and Tagtool drawing – I think this is a really exciting and interesting combination for live performances! 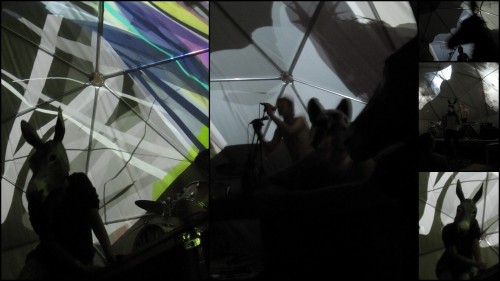 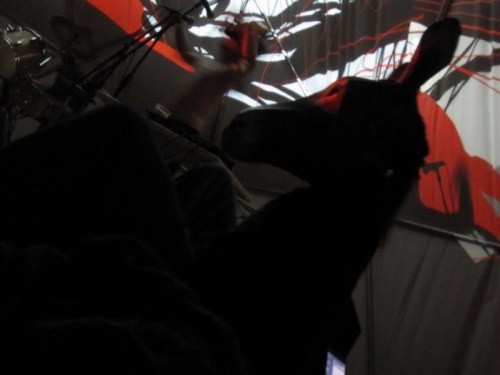 In my next posting there will be photos from K.U.N.T.Z. ‘Golden Kuntry’ show on the last day of the festival – and Dima is now preparing some video for the blog too…..

On all three nights of the festival K.U.N.T.Z. gave performances featuring Tagtool drawings projected onto the interior of the big dome tent ‘Drama’.

On Friday and Saturday nights the programme was ‘Hexentiere’ – a song cycle for seven of the animals associated with witchcraft and, as can be seen in the photo below, in these performances we asked some of the dancers at the festival also to join in the action wearing the donkey and wolf masks we brought with us.

On Saturday K.U.N.T.Z. sang a different programme, ‘The Golden Kuntry’, and this time the band was joined by a special guest, the violinist Michael Makarov. 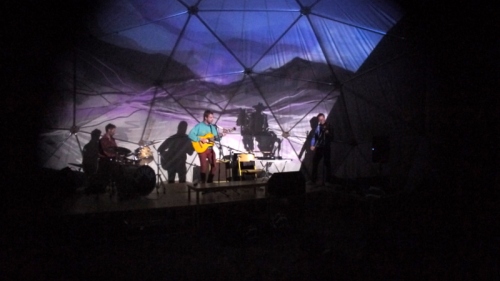 Our friends attending the festival took lots of photos and video for us which was really great – but now I have so many pictures to sort through that it will take a few days before I can make a selection to post on the blog…..

This week we are in the beautiful Istrian area of Slovenia.  From 18 to 20 July we will be taking part in the Etno HISTeRIA Festival at Gračišče but last night we were in Koper doing Tagtool drawing at the big concert given by the Mednarodni Orkester Etno Histria in Titov trg, Koper’s beautiful and historic main square. 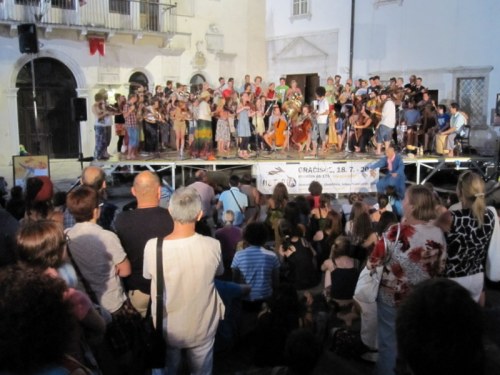 The orchestra, composed of young musicians from all over the world, gave a superb performance and it was a real joy to be part of this really great event!

In the afternoon we set up our workstation to project on the clock tower. We chose this location as the tower has an interesting textured brick surface and was situated on the opposite side of the square from where the orchestra would play.

In the evening, as the audience gathered in the square, the orchestra made a very dramatic entrance, walking in procession singing and playing their instruments, and were accompanied by dancers, acrobats and stilt walkers. 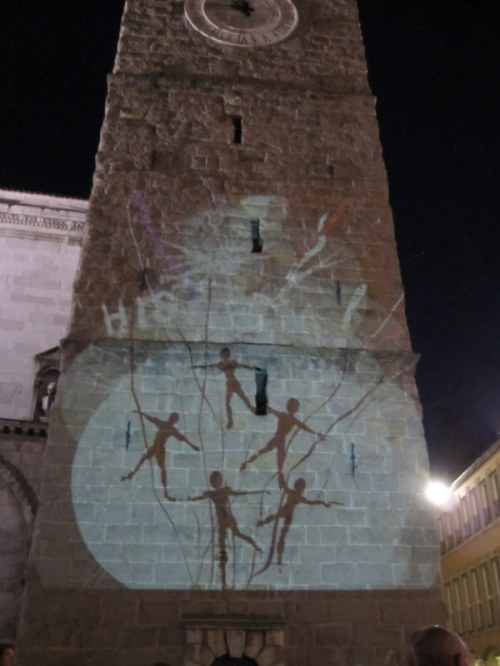 The square is floodlit at night, so we knew in advance that ambient light would be a problem. To overcome this difficulty Dima had planned to use his new triple projector solution in order to give a brighter image for my Tagtool drawings but there was a problem with the electricity supply in the square and at the last minute we had to work off a generator, so we had to use our single short throw projector instead. This gave quite a good image, but not quite as bright as we had planned – a pity, as the tower was a really great surface for projection.
Below are some photos that I took with my little camera during the evening. 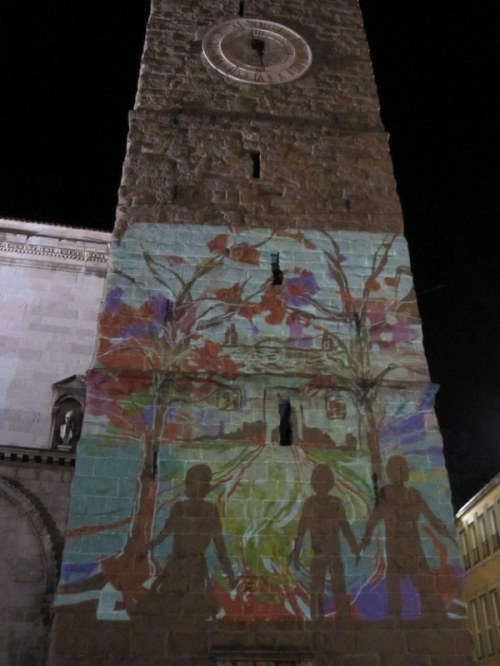 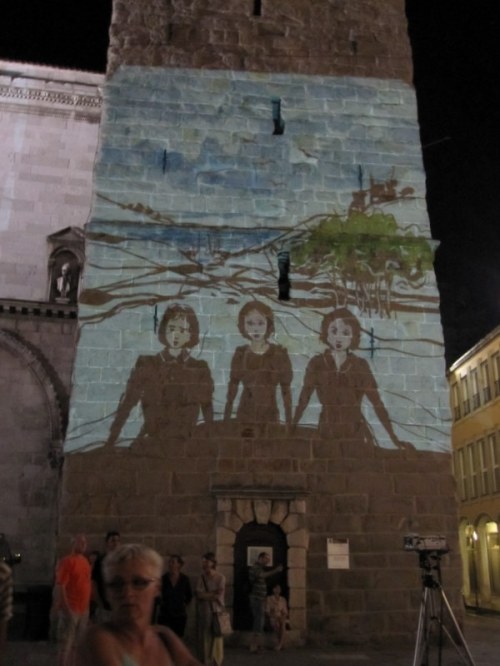 This concert was really special! It was a real privilege to be able to take part – and tomorrow we travel to Ljubljana to perform with the orchestra again before returning to Gračišče to prepare for the HISTeRIA Festival in the forest.