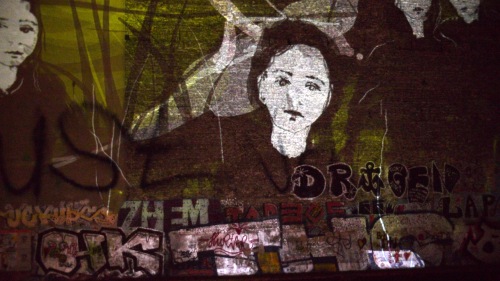 On Saturday 7 February, once it got dark, we went out with our projector, generator and Tagtool to do some urban ‘projector bombing’. 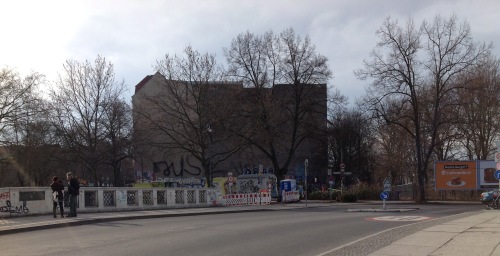 In the afternoon we had gone with Don Moss to look at some possible locations, and the gable end of this huge building, set back from the road with very little ambient light, despite its dark colour looked like an ideal wall for a nice evening of drawing.  Also it would be easy to set up all our equipment in the children’s playground in front of the wall. In the evening we brought our gazebo with us too, a last minute decision that proved extremely useful, as no sooner had we started up the generator and switched on the projector, it started to rain quite hard. On the plus side, the bad weather meant that the sky was quite dark.  I began by testing the Tagtool colours and, as can be seen in the photo below, our Epson projector coped really well, even with the dark brick part of the wall. 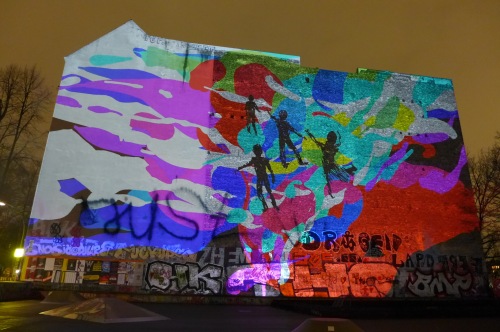 I decided just to ‘grow’ my drawing out of the graffiti  at ground level…..

…and then change the composition by developing a landscape behind the figures that would reach to the top of the building. 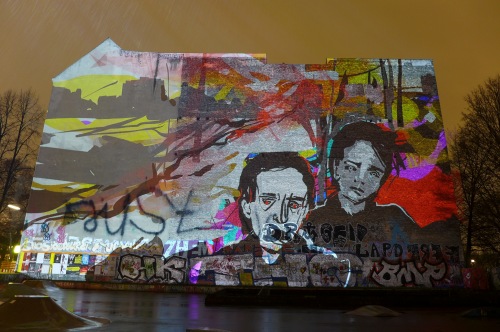 Because of the rain there weren’t many passers-by and the only audience was the friends that we had invited, standing under their umbrellas – but it was wonderful to have this opportunity to draw on such a large scale. 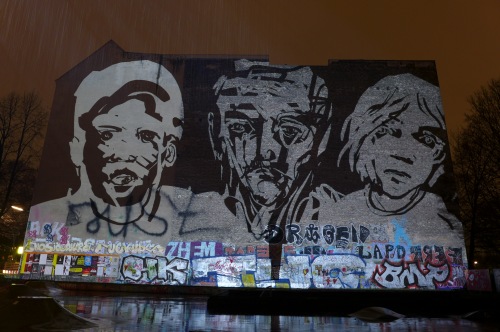 I ended my drawing session with three really enormous heads and then it was time for me to ‘hand over’ to Don Moss.

Don Moss uses the Tagtool for iPad, and for working outside on the street this definitely a much easier option than my big, heavy ‘ old-school Tagtool all-in-one’.  It’s also very well suited to his elegant calligraphic style of drawing. 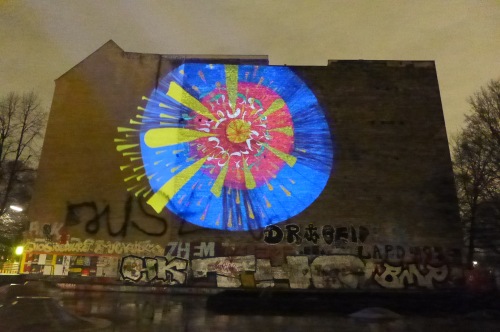 The rain stopped and the sky lightened but our Epson projector still gave a beautiful bright image – and, as a bonus, all the drawings were reflected in the wet tarmac of the playground.  Very nice!

After two hours of drawing it was time to pack up.  I was tired, a bit wet but happy – all thanks to Don, Lenara, Ernst, Bjela and the rest of the company whose enthusiasm and hospitality had ensured that we had a really great time in Berlin! 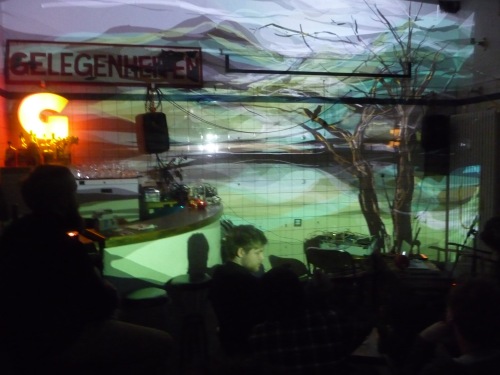 Drawing on Saturday 6 February at the Turkish duo FezayaFirar‘s ‘Elektronischer Salon’ at Gelegenheiten in Neukölln.

It was great to have this opportunity to draw with Emre and Melech again.  This concert was held in a former butcher’s shop on a street corner and although the shop was not big, it had a lovely warm  atmosphere. The white tiles of the interior were an ideal surface for Tagtool drawing too! 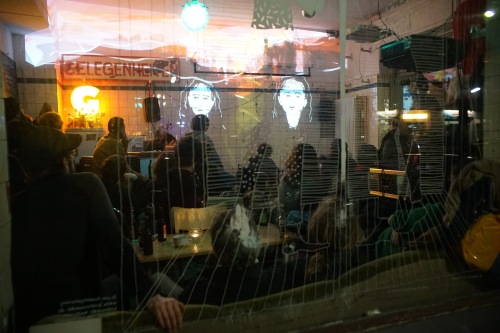 Our Epson projector gave an image that covered the whole wall from floor to ceiling and the big shop windows on either side of the door meant that the drawing could be seen clearly from the street – nice!

I only had a short time to test the Tagtool and projector while the musicians set up their equipment.  Then I made this landscape so that there was a drawing for people to look at before the concert began. 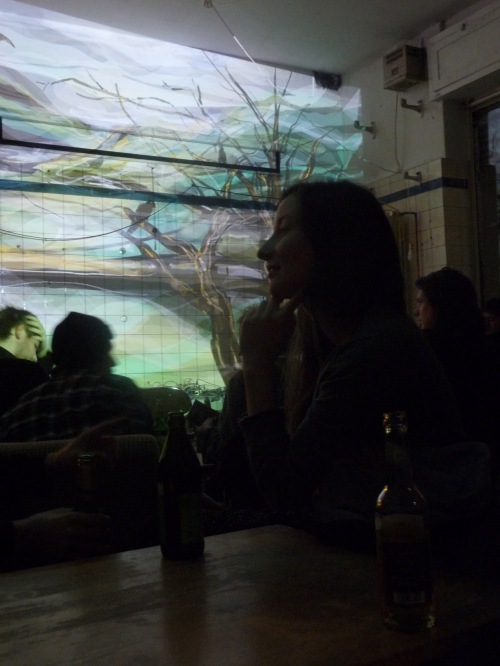 Because we forgot to pack the chargers for our cameras (typical!) I thought there might be no photos for the blog – so I must say a big ‘thank-you’ to our friends Don Moss, Bjela Prossowsky and Kuba Pešek  for kindly sharing their photos of the concert with me.  (Result – lots of high quality photos which made it very difficult to make this selection!)

When the concert began I covered the wall with transparent colour….

…and used this as a background for some line drawing…

…adding figures in black and white in the foreground…

…and then some really big heads…

…and below are two photos from the last drawing sequence of the concert. 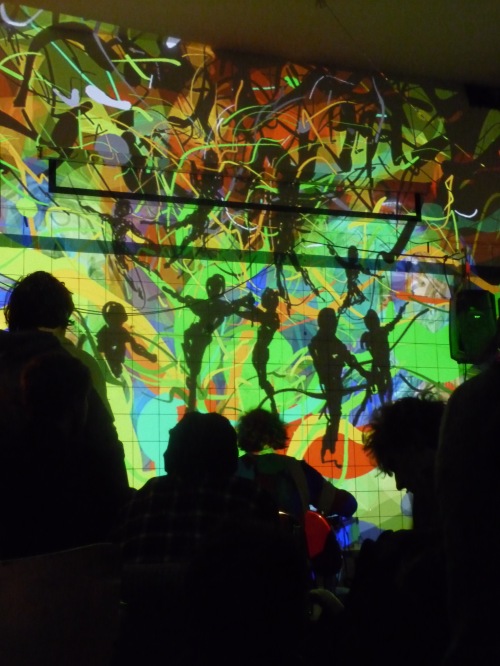