Friday began with a presentation by Markus and Josef reviewing OMA International’s Tagtool work over the past year. 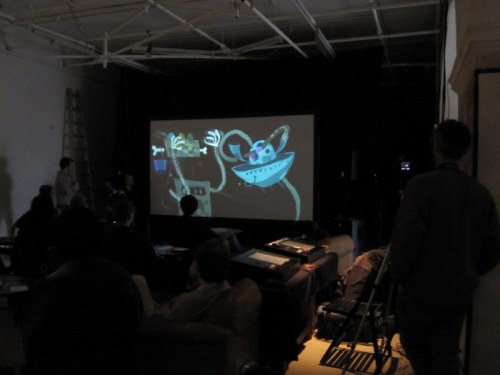 First they showed video of one of the completed episodes their Hilti animation to show the possibilities of  ‘digital puppeteering’ using the Tagtool,

followed by a short video made by a group of immigrant children.  This was a project from Josef’s work with youth groups. 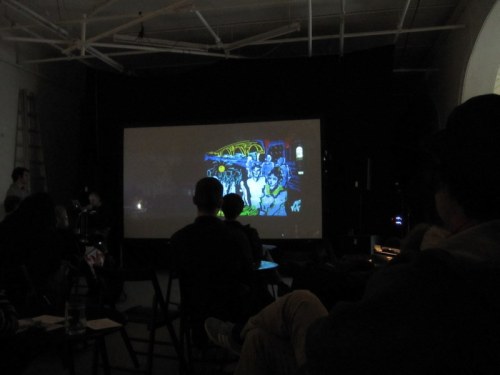 As an illustration of  the use of the Tagtool in  festivals and  other outdoor events Markus showed a  video clip from one of the jam sessions at the Illuminating York festival.

In conclusion they presented their current thoughts about possible development of the Tagtool.  It was then time for the company to divide into the two ‘chink ‘and ‘chank’ groups.  Matthias was leading the Tagtool building group.

As the photos above  show, they quickly started on the task of soldering and putting together their Tagtools. 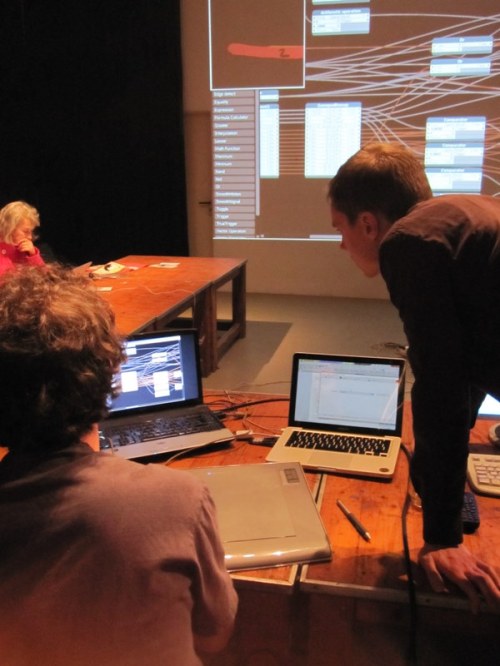 While they were busy with their soldering and assembling, the other group was discussing various aspects of the Nodekit with Gernot, the programmer who has been working on the development of the latest version of this software.   The photo above shows them looking at the present version of the Nodekit and discussing various ideas for improving some of its functions.   This was all extremely interesting for Dima but, needless to say, I found it very difficult to understand!    Instead,  (with the expert help and guidance of Svetli, who proved a most patient and helpful teacher) I took the opportunity during this session to find out how to use the Wiki on the Tagtool website.  I made a little posting on how to make ‘ghosts’ in the Tagtool Use,  ‘Styles and Tricks ‘ section and plan to do some more postings once we get back home.

Before the evening  jams and performances at the Kunstwerkstatt we returned to Gunter’s ‘courtyard kitchen’ at Wassergasse where he served up a delicious dinner which we ate by the light of the campfire – this was really THE perfect conclusion to the day’s discussions!

The open session that began the evening Tagtooling was extremely lively and by the time that the artists’  performances began a large and enthusiastic audience had gathered.   I took lots of photos of Maki and Iink’s session –  here is just a small selection from what was a very accomplished and varied performance. 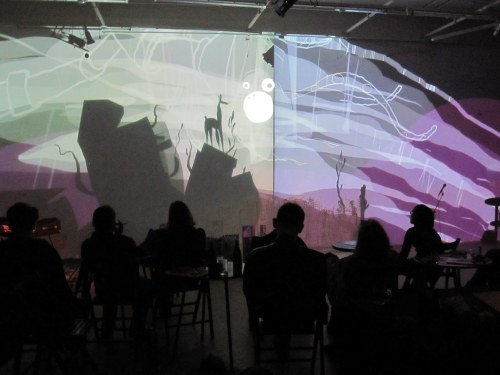 Later, when Dieter and I started to draw, I gave my camera to Dima to take some photos of our work.

It was great to jam with Dieter and Supraplus, the group who provided the live music for our performance – and the two Tagtools and four projectors gave us an enormous  ‘canvas’  to work on.  In the foreground of the photos is Dieter’s paper sculpture ‘Cell City’  – an exciting three dimensional element casting shadows and illuminating the foreground of our drawing. 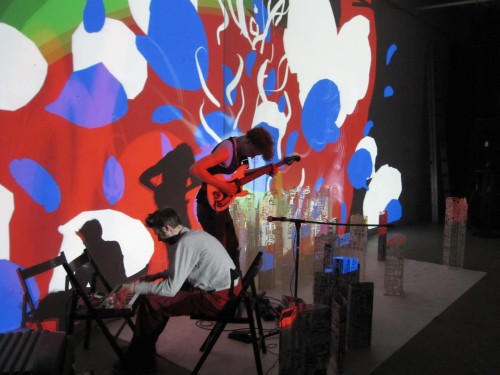