This was our second year at the Hackney WickED Festival and, as last year, we planned two evenings of live Tagtool drawing, making the projections from the roof terrace of Liquid Studios. This year, however, we invited a group of artist friends from Germany and Austria, as well as some old friends from London, to exhibit work at the studios and perform with us. So – everyone was ready to get together and have a good time, but first, as always, there was the hard work of preparing the roof terrace for the evening Tagtool performances.

Ash had this enormous length of white material in his workshop (much better than the screen that we used last year!) and he masterminded fastening it on to a wire using plastic clothing tags, hoisting it up between the buildings in the lane and holding it taut with bungee ropes to form a spectacular wide screen of cinemascope proportions.

Because we were performing with a live band and using two Tagtools and three projectors it was essential to erect some form of roof to protect both performers and equipment from the weather. We bought a big tarpaulin from the local builders’ merchant and, with the architectural know-how and nautical skills of Barry and Philip, there was soon erected this elegant temporary ‘roof’ over one end of the terrace, which cast a very nice cool shade in daytime as well as serving as a protection from any rain that might fall during the performances. 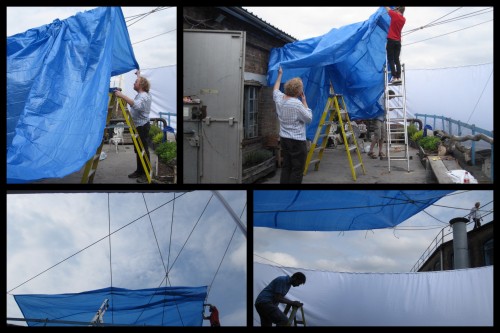 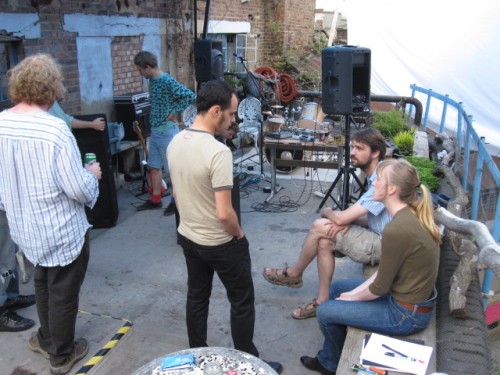 …while at the other end of the terrace Vlad and our friends from Germany prepared the bar. 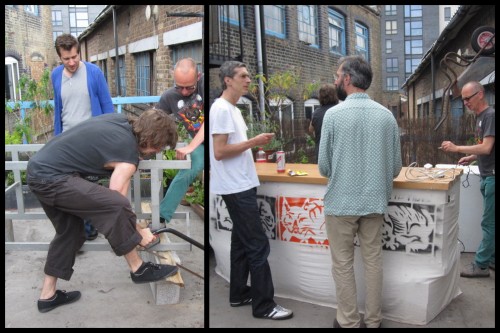 This seems the right place to say a very big ‘thank you!’ to everyone who helped in these preparations – and also to all of our friends who worked so hard serving at the bar throughout the weekend – it was your combined efforts that helped to ensure the success of this event!