In his quest to develop a tool that will enable me to draw in stereoscopic 3D, Dima is now almost permanently glued to the computer and has has moved his workstation from the studio into our sitting-room. Needless to say, the dogs are profoundly unimpressed with this new arrangement….. 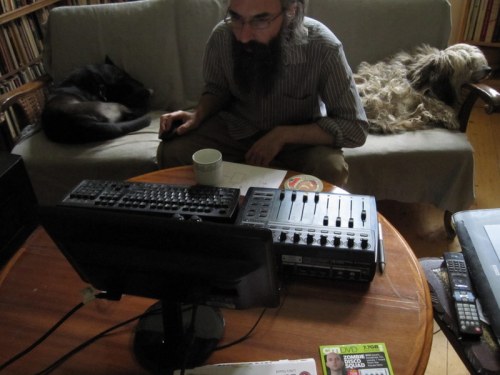 Now I am confined to my desk in the corner of the room and from time to time Dima asks me to ‘try to do a drawing’ on the TV monitor. I’ve been taking photos of some of these drawings – with the application being so full of bugs, both ‘known’ and ‘unknown’ that the process of drawing has gone from difficult, through simply weird to completely impossible!
The 3D bit was working really well in the beginning (this can’t be seen in the photo below of course!) but the drawing line went all over the place making anything other than abstract patterns virtually impossible to control. 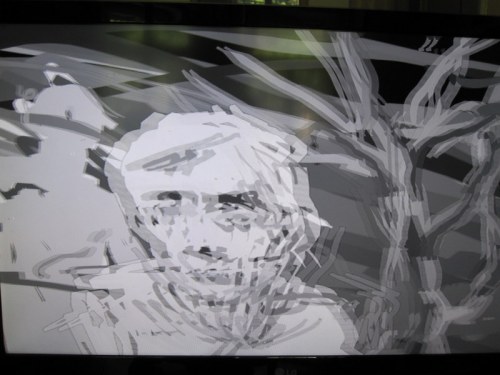 So – deep gloom, then Dima started all over again to try to achieve a line that I would be able to control accurately….. 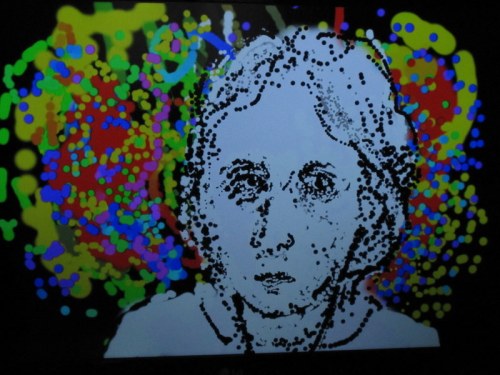 This version was great fun, but everything turned into pointillism – and then after some more tinkering, into something really strange……

……finally, Dima ended up with these really sinister worms (Unfortunately a photo doesn’t show them properly. I should have taken some video as they seemed to move and wriggle as they gradually faded and disappeared).

So – deep gloom again, and another new start……which this time, though full of bugs both ‘known’and ‘unknown’, I thought looked much more promising! But – the pen had no pressure sensitivity and if I lifted it up to make a mark in a different position on the drawing the two points automatically joined up so it was only possible to draw using a continuous line.

So – Dima’s programme still may be full of bugs both ‘known and unknown’, but at least he has got it to the stage where I am able to use it to draw….

Now he is working trying to fix the ‘known bugs’ – but I have a terrible feeling that there will be lots more ‘unknown’ ones lurking ready to pounce, destroying everything and sending him back into deep gloom again…..