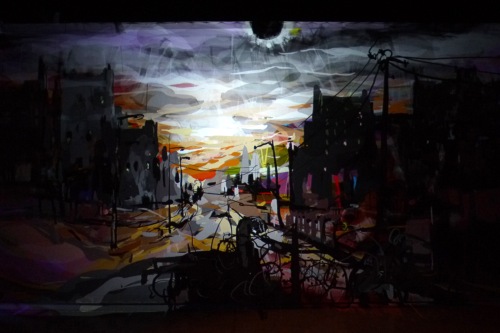 My first big Tagtool session of 2016 was this temporary floor to ceiling mural  at La Fabrika, where Vložte kočku were holding their 8th anniversary concert on Wednesday 20 January.  I had made live Tagtool drawings to accompany Vložte kočku’s programme, ‘Otázka času’ at this theatre in Prague last year, and for this year’s concert Dima made a new design of LED lights and projections for the stage.  I made this Tagtool mural in the afternoon during rehearsals so that there would be some artwork for people to look at in the evening in the bar when they arrived – and also during the interval at the concert. 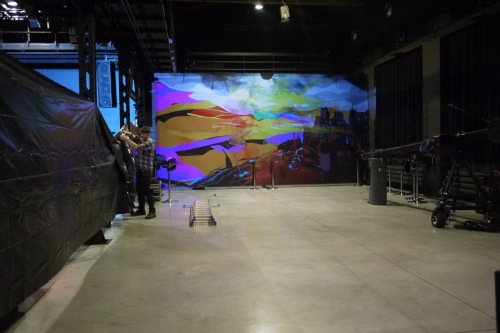 It was great to have this opportunity to use the Tagtool to make a really big painting.  The Slévárna studio at La Fabrika is a wonderful space and on the black screen ‘wall’ our Epson projector produced vibrant colours and lovely velvety blacks.  I was able to take my time and build up the composition slowly using lots of layers of drawing.  The photo above shows the scale of the work… 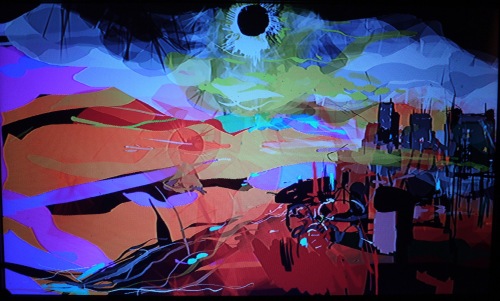 …and this is a photo of the drawing as it appeared in the monitor attached to my Tagtool workstation.  In order to cover the whole wall in the bar from floor to ceiling our projector had to be mounted at ceiling height at the opposite end of the hall.  Unfortunately the cable that I had brought to connect to my Tagtool only just reached to the ground, which meant that I had to stand directly underneath the projector and at this distance I was too far away to see any detail in my drawing.  Having this little monitor to glance at from time to time proved to be very handy!

Below is another photo taken from my monitor that shows the finished mural. 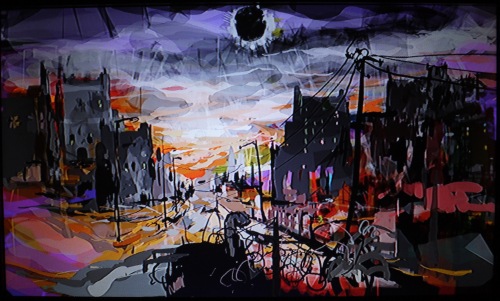