On Monday 9 April I made drawings to accompany the Czech premiere of the orchestral work ‘Graffiti” by Unsuk Chin which was performed by the Berg Orchestra as part of their concert entitled, ARCHEOLOGY OF THE 20th CENTURY. The concert was held in the  cavernous basement cinema of the Veletrizni palac – and featured, as announced in the programme, ‘…..graffiti, intonarumori and old radios!’. I took photos of the Tagtool drawings (below) that I made in my studio as preparation for the concert  so that I would have some images to refer to when I began to draw at the venue.

We arrived at 8.30 am on the day of the concert and Dima set up my big ‘oldschool’ Tagtool all-in-one so that I could start drawing my ‘temporary graffiti’ on the long wall on one side of the auditorium before the orchestra started their rehearsal.

For this image I used our own lovely bright 6000 lumen Panasonic projector, but for the other walls I had to use Studio Hrdinů’s less powerful projectors. Using their smaller projector I drew with my Tagtool for iPad a white background to cover the grey wall opposite which was bisected by a railing and technical storage area. Using this as a background I made some bolder images drawing mostly in black with minimal colour so that having a weaker projector did not matter too much.

Then I began to draw on the wall behind the stage, using my ‘oldschool’ Tagtool mini and Wacom tablet with the brighter of Studio Hrdinů’s two  projectors.

This was a real drawing marathon – three walls, three projectors and drawing all day, using my iPad and my two ‘oldschool’ Tagtools – then capturing the final images ready for projection at the concert in the evening. Dima took the photos below with his mobile phone during the performance and they show clearly that Studio Hrdinů’s stronger projector (which was supposed to be 5000 lumens) was not able to cope so well with the ambient light as our Panasonic – which was a pity. 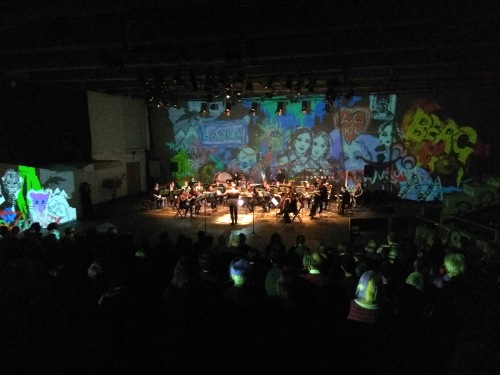 As one side and the back wall of the auditorium were flat surfaces, the screen captures of the final drawings (below) show very clearly and in more detail the images that I drew. 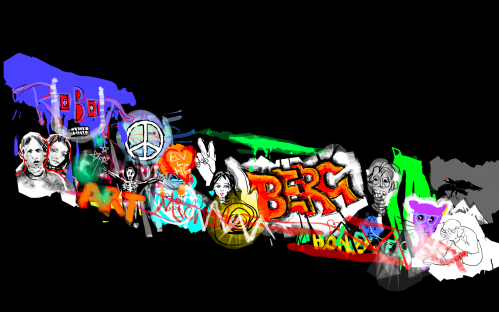 I really enjoyed making these ‘temporary graffiti’ –  but after all this hard preparation work it was great just to be able to sit back and enjoy the concert!

To end this post here is a very nice image by photographer Karel Šuster showing the audience and the whole of the auditorium.