Concert in Vienna; Film in Dresden

We have had a busy start to the year. On 16 January we had a live Tagtool drawing performance at the theatre, Garage X, in Vienna – an event arranged by OMA International and billed as, ‘The Tagtool True Players’. Our performance accompanied the group Weisse Waende. Although we had heard this group playing live (for one of OMA’s ‘Hilti’ performances) and we had seen each other’s websites, we did not have an opportunity to rehearse with them before the performance. So -although we had prepared some material beforehand this event turned out to be a real jam session! Here is the first clip of the performance.


When we arrived we were happy to find that the theatre, though quite small, had plenty of space for all our equipment, a beautiful big white wall behind the musicians and a ceiling mounted projector. The theatre sound and lighting technicians got everything ready but when we tested our equipment there was a problem – Dima had quickly to reconfigure all our prepared material to match the (lower) resolution of this theatre projector. (He managed to complete this task with only minutes to spare before the performance!). Jörg Stefke made the video documentation and all of the Tagtool drawing was captured directly in the computer. This meant that Dima would have plenty of material from which to make a video of the whole event.
Editing all this has turned out to be extremely time consuming and not entirely straightforward! First Dima had to resize and match the computer captured material with the video footage and then, when he uploaded the first section of video for some reason it turned out to be very dark. However, I will post the corrected clips on Vimeo as Dima completes them.

Last weekend we were in Dresden to see our film, ‘Tales from the Attic’ screened at the Schmalfilmtage Festival. 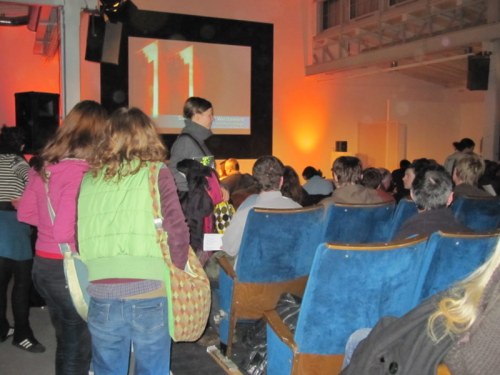 As these photos show, there was a large audience and it was the first time we had had the opportunity to see the finished version on the big screen – which was very exciting! We had the stop frame Super8 footage of my Tagtool drawing for this film transferred to mini DV at Cineco in Amsterdam. (The ‘homemade’ telecine version and photos of my Tagtool performance is on the blog – 22 September 2009). I will post a video of the final version at a later date.